This guide shows OLM users how to use and choose naming conventions for channels to manage their operator upgrades.

Operator Lifecycle Manager (OLM) provides a channel concept that allows you as the operator author a means to specify a set of update streams for your operator.

Operator authors deal with two key tasks associated with OLM channels, first, how to define a channel for your operator and then lastly how to interact with OLM to deploy your operator using channels.

There can also be multiple channels for a given operator package which is used to offer different support models (e.g. pre-release, production). Here is a diagram that shows the relationship of operator versions to channels:

In the diagram above you can see the following:

Here is the view of another catalog, “vendor:v4.7”, that shows you can change the upgrade path for an operator by what operator bundles are contained within the catalog: 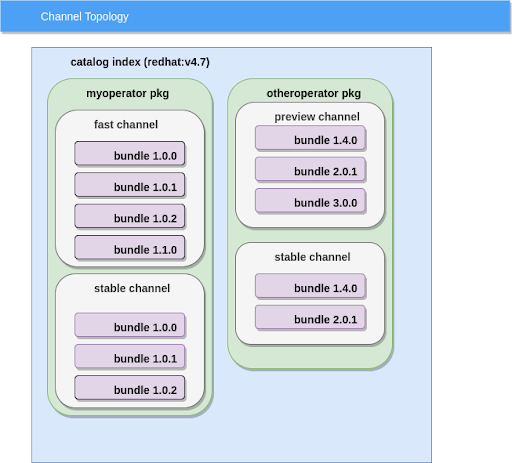 Operator authors define the channels they intend to use by creating labels within their operator bundle. Bundles contain metadata about a particular operator version. For example, when you build an operator bundle, you specify an annotations.yaml manifest which gets included into the bundle image. Here is an example snippet of an annotations.yaml file including channel information for that operator:

This example shows that you are defining the candidate channel to be used for this operator bundle. Operator bundles are loaded into an Operator Index image using the opm command. It is important to note that by specifying a channel value like this, you are essentially creating a channel which can then be subscribed to. If you mis-type the channel name, there is nothing that validates the channel value because the channel is known by whatever you provide.

If your operator bundles do not specify a default channel, a default channel will be picked by OLM based on the lexical ordering of the channels you have specified. For example, if your bundles specified channels of candidate and stable, then candidate would be picked based solely on the names chosen and character ordering (e.g. ‘p’ comes before ‘s’). Dependency resolution is described in more detail here.

When an end user or administrator wants to deploy an operator using OLM, they create a Subscription manifest, e.g:

The Subscription is providing hints to OLM which are used to determine exactly which version of an operator will get deployed onto the cluster, in this example OLM will look for an operator to deploy that belongs to the candidate channel within a specified catalog source.

Note that exactly which operator version is deployed can depend on more than what you specify in the Subscription. On initial install, OLM will always attempt to install whatever is the head of the specified channel by default. Settings within the operator’s CSV also are used by OLM to determine exactly which operator version OLM will deploy or upgrade.

Our motivation with this convention is to encourage a better user experience for OLM users to have an intuitive understanding of the level of maturity and supportability of the solutions that will get installed. It can get very confusing for cluster admins and Operator consumers in general when each solution distributed in the OLM catalog adopts different names or different meanings for the same terminologies.

The names you choose are notional and up to you to decide, however, picking good channel names requires some basic guidance. What is described below are different channel naming conventions that are commonly used by the operator community to denote different operator upgrade use cases.

Note: If your new operator version release contains an API(CRD), which represents new experimental features and is not supported (like “tech-preview”), then the recommendation is to capture the maturity in the API version (that is group: my,example.com, kind: Backup, version: v1alpha1) and not in the channel name. This follows Kubernetes API versioning recommendations.

With the above channel naming convention, you are always moving end users to the latest versions of your operator. For example, you could create a version 1.1.1 that is considered fast, adding it to th fast channel. Users can experiment with that fast version, but the stable version for example 1.2.0 would be added only to the stable channel.

NOTE The above terminology and support statements are very similar to the channels of distribution used by Kubernetes, (e.g here), and popular vendors such as OpenShift (e.g here). In this way, by adopting it you will bring a better and more intuitive understanding for the maintainers, users and community.

By following the recommendation, you would provide the major versions of the Operators in the channel naming. Consumers can then subscribe to a channel with confidence that none of the versions in the channel will introduce breaking changes:

Attention: The versions on the channel names are related to the Operator version and not its Operands.

Example 3 (Recommended Option is the most common scenarios)

An operator should be supported at various operator major/minor versions.
For example, you might have a v1.3 and also a v2.4 releases of your operator that you need or want to offer support for at the same time. However, you might not want to have OLM upgrade users to the v2.4 Operator but instead keep them upgrading within the v1.3 versions. In that case, you would end up with channels as recommended above but with major/minor version information applied as follows:

Attention: The versions on the channel names are related to the Operator version and not its Operands.

In this example, subscribers know which database version they are subscribing to and don’t necessarily care which operator version is being used, but will likely just want the latest operator version in that channel. As with the previous naming convention examples, we start the channel name with candidate/fast/stable to denote the maturity level of the operator. Using all 3 naming prefixes is optional, you might only want to support a stable channel.

Channel promotion is the notion of moving an operator from one channel to another. For example, consider the case where you have an operator version 1.0.1 which is found in a candidate channel, then you might decide to offer support for that version and want to move it to a stable channel.

Today, channel promotion is achieved by creating a new operator version (1.0.2) that is labeled with the channel(s) you want to promote to (as well as any channels you want to keep it in).

OLM provides a variety of ways to specify updates between operator versions. Before we continue with the following recommendations, make sure you understand the options by checking Creating an update graph with OLM.

Within a channel each patch release should be directly upgradable to the HEAD of channel. Use skips or skipRange to provide this behaviour. (i.e. if you followed the above Example 3 that means use skipRange to publish a patch for 3.6.zunder thestable-v3.6 would mean setting the skipRange to be >= 3.5.z < 3.6.z, where 3.5.z represents the oldest 3.5.z version for which you can provide direct upgrade support to 3.6.z latest)

Let’s imagine that you will be releasing the Operator bundle v3.6.30 (patch release under the channel stable-v3.6) and that you have published so far:

You do not need necessarily to use 3.5.25. Therefore, you should use the oldest 3.5.z version that supports upgrades from. Be aware that the ability to configure the path using this example from an Operator version like 3.5.25 (or 3.5.17, or something else) instead of 3.5.0 is a mechanism to constrain the support matrix when necessary, it’s not the default recommendation.

Note If you would like to ensure that the users of your Operator are still able to install the Operator bundle version 3.6.29 by using the option startingCSV added manually in the subscription then, you will need to also use the replaces: 3.6.29 to ensure the older Operator bundle does not get pruned from the index catalog via the OLM resolver.

Attention (Be aware of the following scenario)

, you could ensure that your users can more easily upgrade to the latest version since they will be able to install the new 3.7.11 release directly from 3.6.z <latest release on 3.6 channel> instead of having to upgrade through Operator version 3.7.0 which may contain bugs that are already fixed in both the 3.6.z version they had installed, and the 3.7.11 version they are moving to.